Everyone is raving about The Netflix documentary on Jim Carrey’s unique and untraditional acting methods. Jim Carrey is known for being serious about committing to his roles. In this Netflix original you see Jim Carrey staying in character on and off the set. His role as Andy Kaufman in the movie Man on the Moon is most memorable for its accuracy, but the actors and everyone else on set can attest to the fact that his accuracy was a result of Jim Carrey becoming Andy. Carrey explains that when he plays a character, he feels as if he loses himself and becomes whoever he needs to be by “killing” his personality. 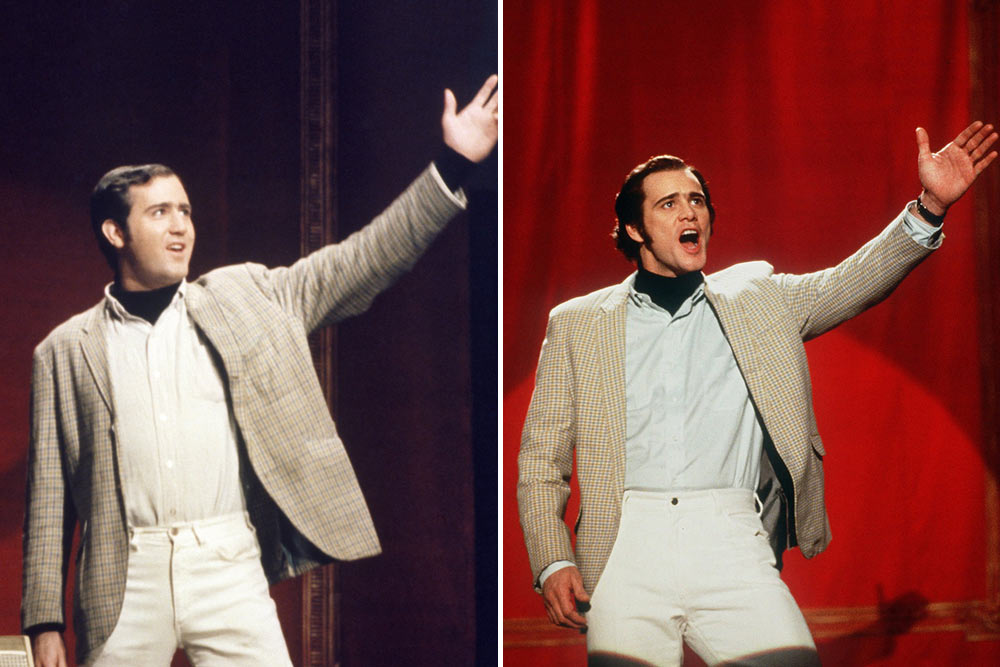 During the long months of filming Man on the Moon, he took his commitment to great lengths. Jim would only respond to the name Andy, and “Andy,” would speak about Jim as if he were a completely different person.Those around him during the filmmaking were absolutely amazed. Co-stars Danny DeVito and Paul Giamatti felt as if they were speaking to the real Andy. DeVito was filmed mentioning how bizarre it was. Carey took his role so seriously that he would refer to the actor playing Kaufman’s father as “daddy,” and beg for his love and support off-screen.

Longtime friend of Kaufman, Bob Zmuda, and ex-girlfriend, Elayne Boosler, would surround Jim throughout the production with amazement. They said that every detail about Jim, down to his mannerisms, were identical to Andy’s. Once word got out about the “re-birth” of Andy Kaufman, Kaufman’s family members came to speak to Jim while he was in character. Carrey found that having Andy’s family members meet him while he was in character, offered them a type of healing. The most amazing visit was to Kaufman’s daughter. Before Andy was ever married, he had a daughter who he gave up for adoption. By the time she discovered who her father was, it was too late. She was not able to meet him before he lost his life to cancer. She heard about Jim’s chilling resemblance to her biological father and decided to make a trip to the set of the movie. She asked that no footage of their meeting is taken and for the respect of her privacy. Carrey agreed to the terms. This was the first time she was able to “meet” her dad.