America has more than a few families that are notoriously infamous. One, in particular, the Westboro Baptist Church, is at the top of America’s most hated family list and for good reasons too. The Westboro Church is quite similar to a cult in the way that its members cling to each word their pastor says as if it were the divine spoken truth. Though this Church does not have many members they’ve made such sickening, obscene and insensitive remarks that that landed them on the news more than a few times. Every time these members open their mouths there’s a 100% chance jaws will drop.

The Westboro Church has a hateful message that they’re very open about. In fact, part of their practices includes picketing which is exactly what it sounds like. Kids and adults alike carry large signs and shout their beliefs to their targets and anyone who walks by. Their main battle is against homosexuality and fag enablers which are, according to them, people who allow and promote homosexuality.

So many families have been deeply hurt by the verbal terror they raise on people, dead or alive. You’ll find them rejoicing at the funerals of soldiers, shooting victims, celebrities, and homosexuals.

America wouldn’t be America without freedom of speech, but The Westboro Church uses this right is downright SAVAGE. Here are some outrageous facts about the church’s members and beliefs. You’ll understand why no other Church will associate with them and why the murderous dictator Saddam Hussein was fond of the group.

The One Who Created America’s Most Hated Family

The Westboro Church started out as a regular Baptist church. In 1954 they hired Fred Phelps. His Zeal and passion were so inspiring he was promoted to be the head priest. Little did everyone knows, he would turn those who followed him into the most hated family in America. 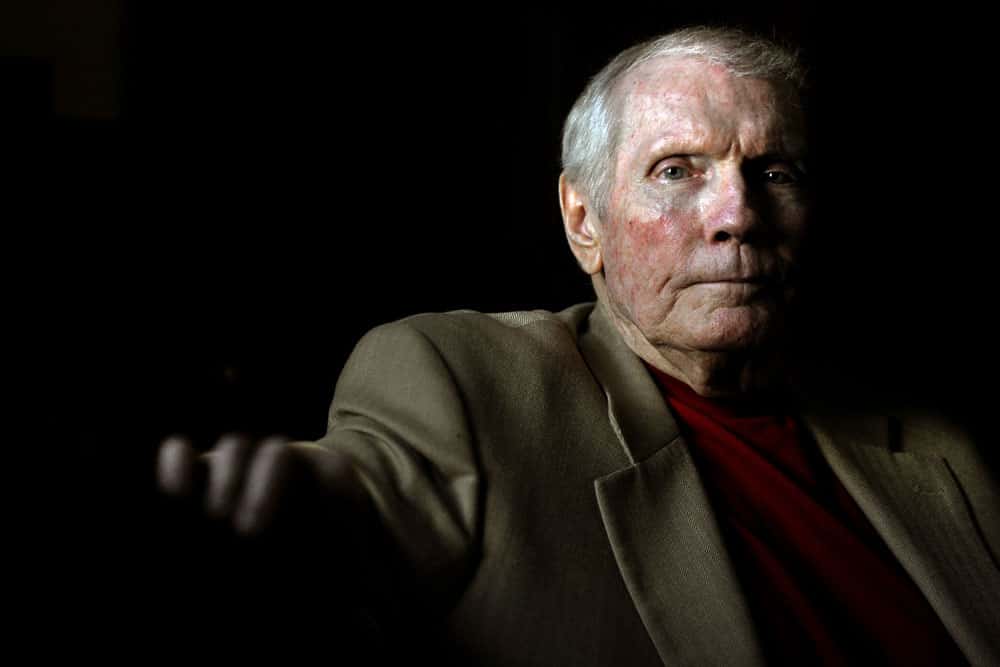 The emotional damage his leadership would bring to the citizens of the United States will never be undone.

Members of the Westboro Church developed a belief system that ended up excluding them from the rest of the world. They go to regular schools but stay within the church. Members are polite to others but they don’t surround themselves with “sinners.” 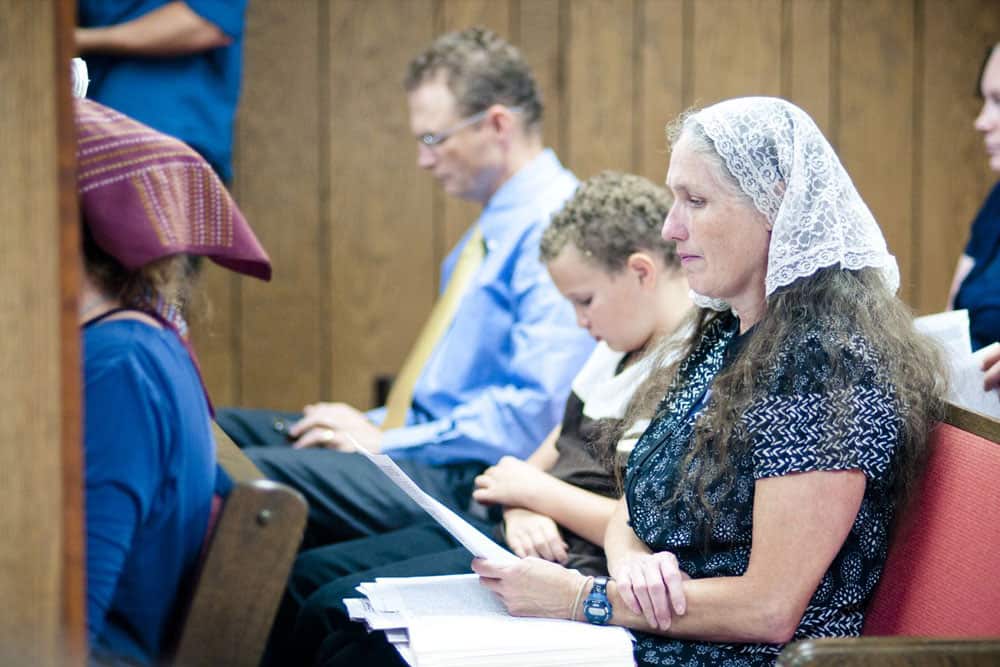 According to them, everyone else is going to hell and they’re sure to let you know!

3. An Aggressive Take on Homosexuality

This cult-like church has a strong obsession with homosexuality. They focus most of their energy on picketing and protesting places, people, and countries that are homosexual and or support homosexuality. They call same-sex relations and marriage an abomination and claim it will drag those involved with it to hell. 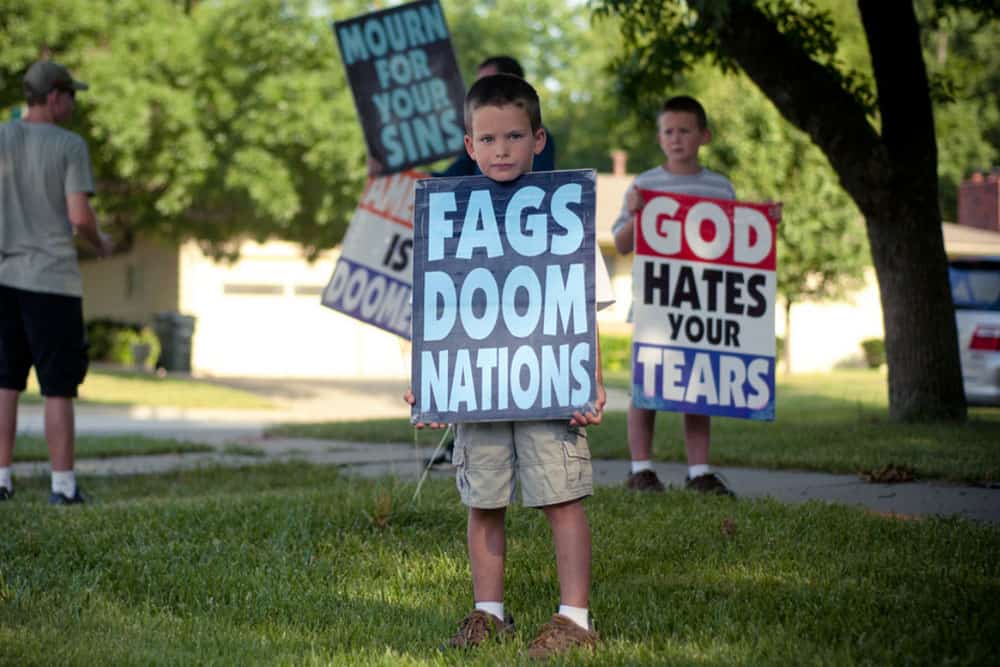 Members of the church teach their children to think the same way they do about homosexuality. Children as young as 5 years-old participate in picketing.

In 2016 a gay club in Orlando was shot up. forty-nine people were killed and 53 injured. The families of victims were left devastated as they mourned the loss of their loved ones. American’s showed solidarity and anger towards the unfortunate events. Meanwhile, the Westboro Church sent out notices that they will picket the funerals of the victims. 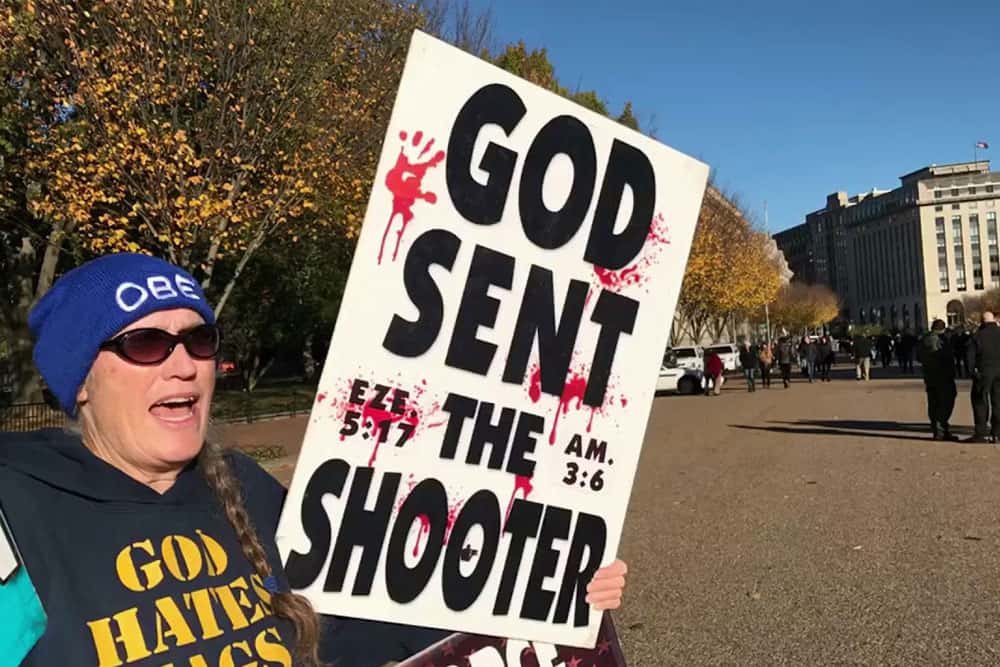 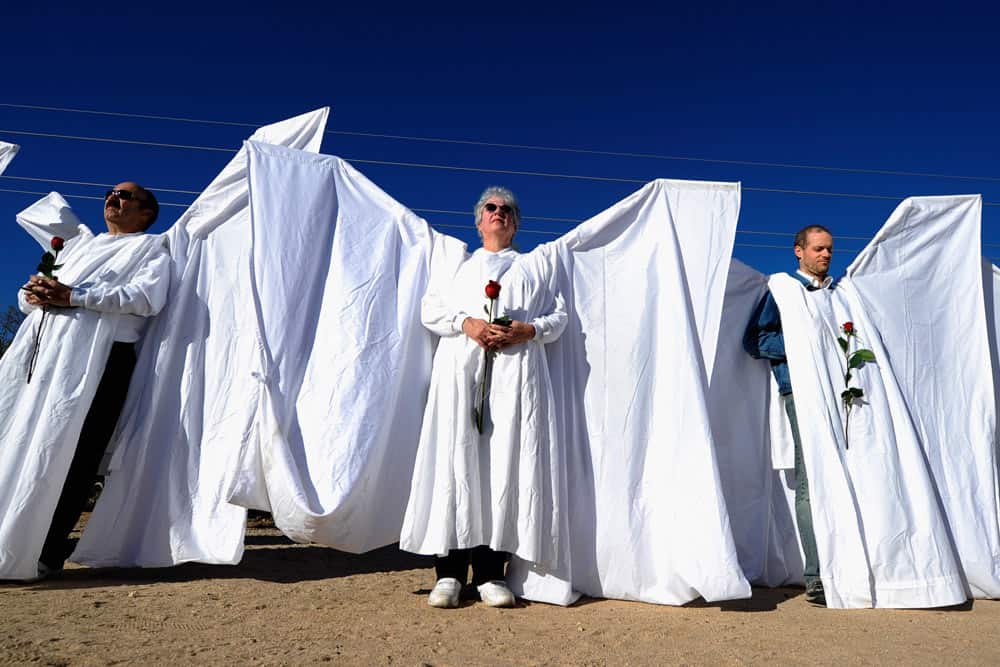 People dressed in white defended the families and dressed as angels to block and protect those mourning from the hateful words of the Westboro Members. 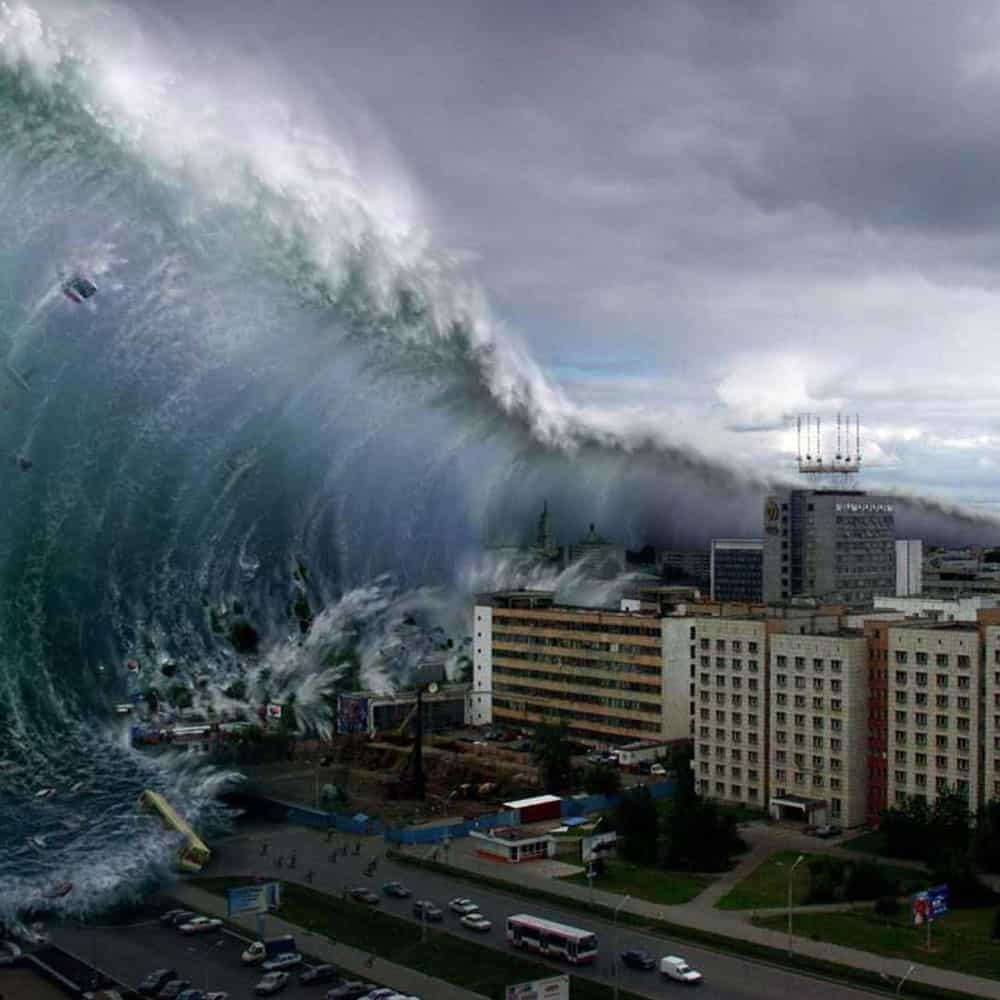 Days after the disaster members of the church picketed on the streets shouting that God sent the tsunami to kill all the sinners. They were especially happy about Swedish people dying in the tsunami

The Swedish government arrested a priest for preaching against homosexuality in an offensive and aggressive manner. When the Westboro Church members heard about it they picketed on the side of roads shouting that Swedish people are going to hell. They also published several articles about what happened and upset the Swedish Government. 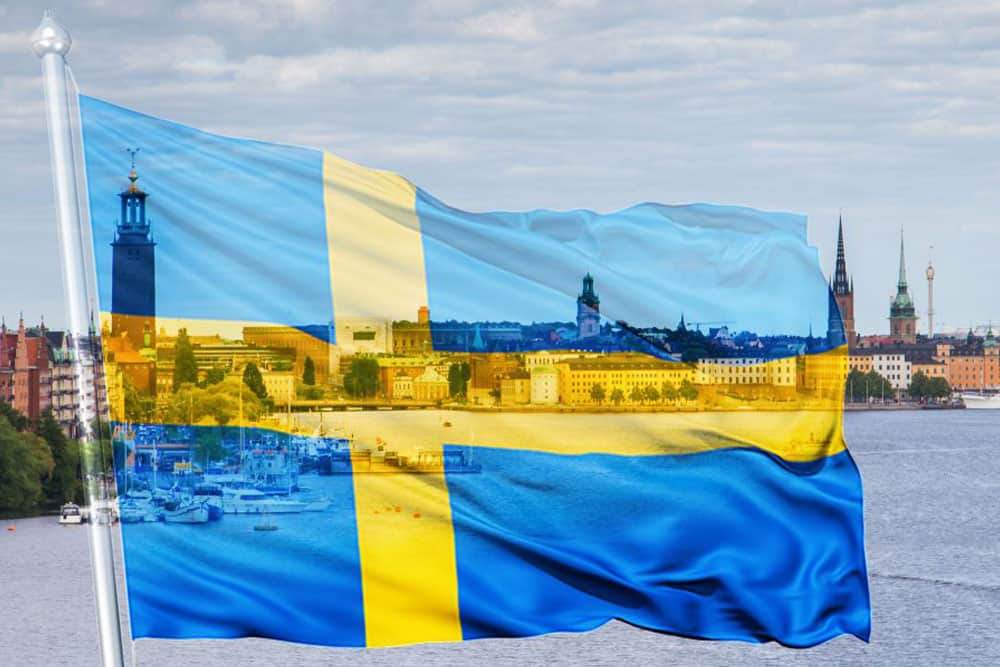 A high ratio of tourists who died in the 2004 tsunami was Swedish. The Church members used that statistic to “confirm” their belief that people who promote homosexuality will be punished by God.

7. Picketing is More Expensive Than You Thought

The Church travels in packs all over the country to picket their targets. They go to churches, Jewish schools, funerals, and loads of other places. While screaming hateful words doesn’t cost any money, traveling does. Westboro Church spends an estimated $300,000 a year on picketing. 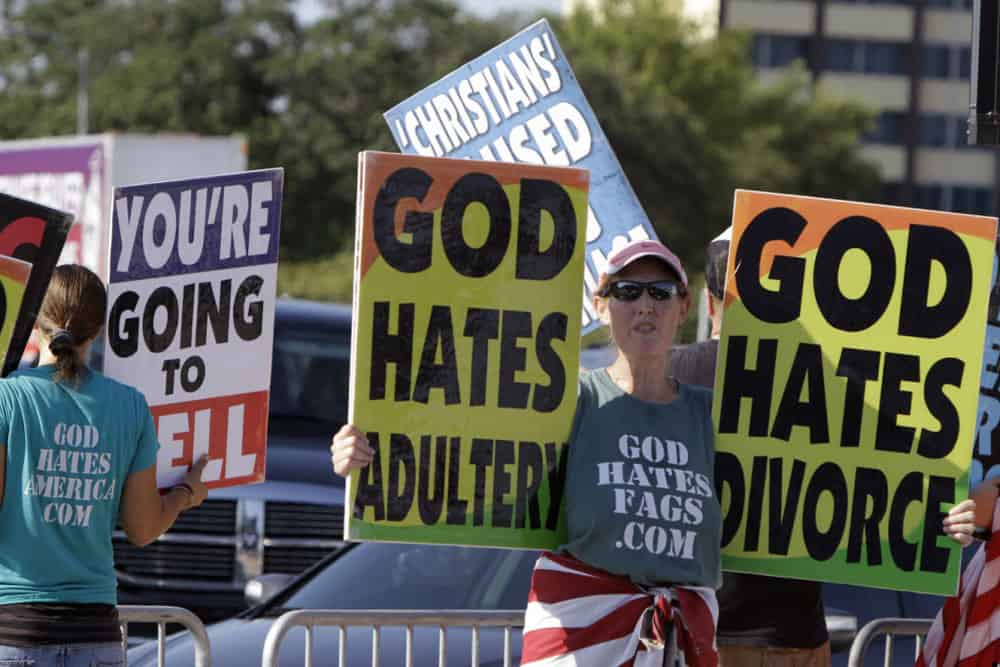 They also have interesting approaches to obtaining this kind of money.

8. Westboro Church Members Give 30% of Paycheck to the Church

Many cults require their members to donate large sums of their paychecks to their community. Members of the Westboro Church are required to do the same. Thirty Percent of all working member’s income must go to the church. The money is usually used to cover the cost of picketing and Church Maintenance. 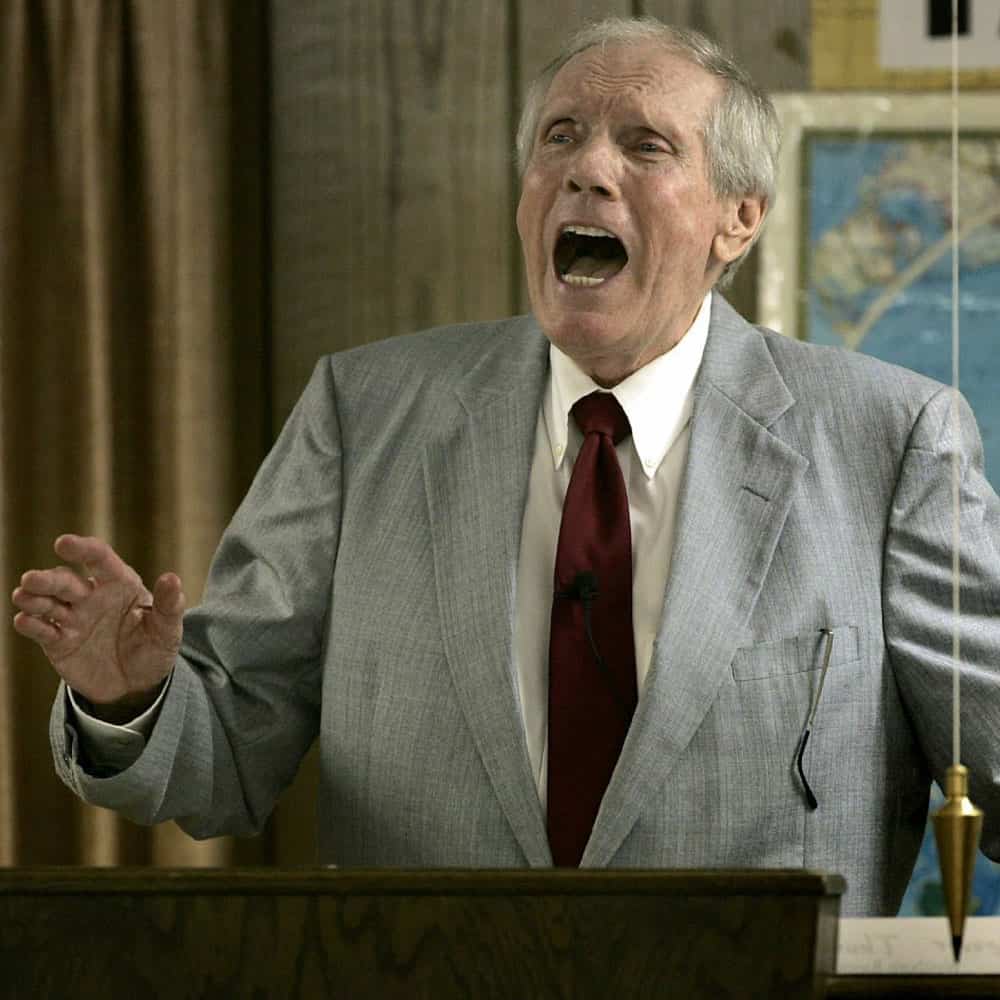 How else do you think Fred Phelps got a paycheck? That’s right, his trusty followers provide him with cash.

The Westboro Church has a special hatred towards anyone who defends the USA. One of their most common places to picket is at the funerals of fallen soldiers. The Westboro members chant that gd hates the fallen soldier and their families. According to them, it is a sin to support a country that allows homosexuality. 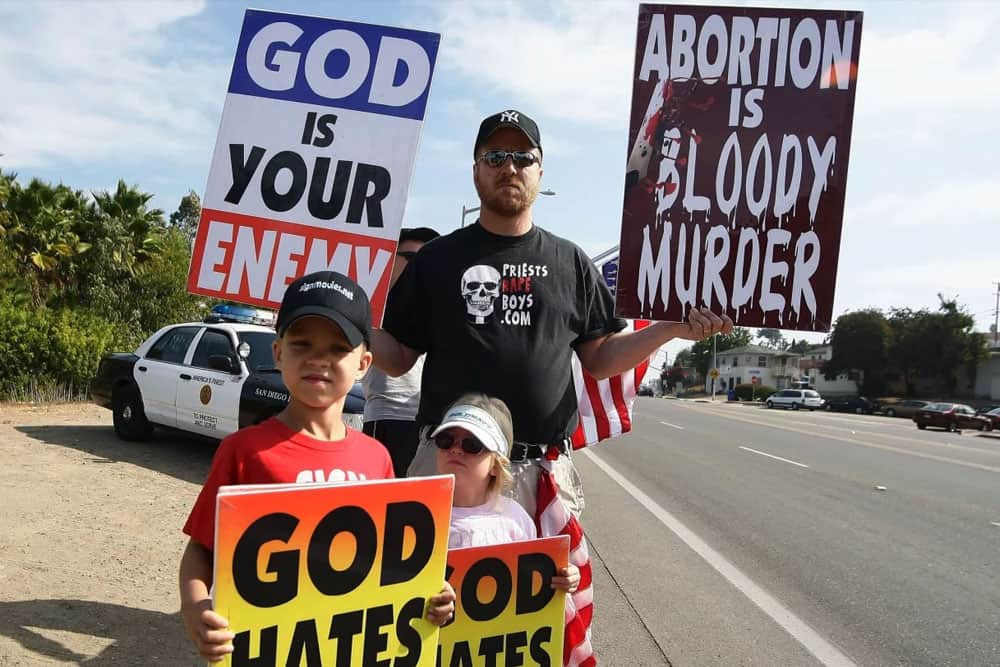 Families dealing with the loss are met with further devastation when we see a group of men women and children celebrating the death of their son or daughter.

10. The Church Protested Blake Shelton’s Concert Because He Divorced His Wife and Remarried

The Westboro Church believes people are adulterers if they get a divorce and remarry. Blake Shelton falls into their definition of an adulterer, that’s why the church decided to picket his concert, They wrote an open letter to Blake Shelton telling him he’s not going to heaven because of his divorce. 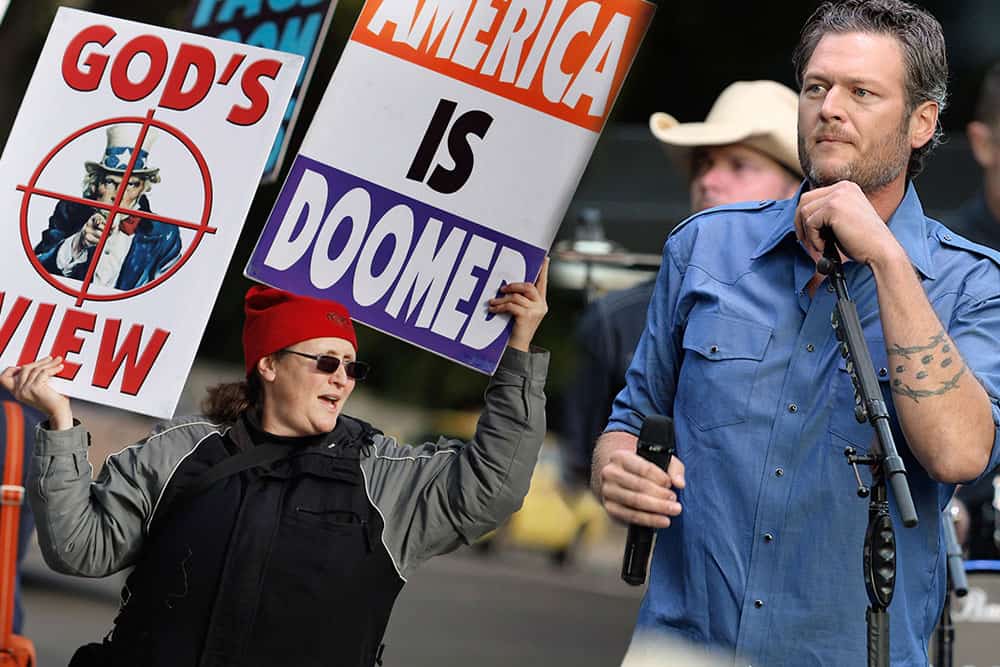 Blake responded with a sense of humor.  “Y’all may want to keep an eye on ur women at my show. I’ve got a few band and crew guys that’ll be smacking that holy a**!” he tweeted when the group said they were planning to picket his show in Kansas City at the time.

The Westboro Church has no mercy when it comes to feelings. They rejoice in school shootings, natural disaster and the falling of American soldiers. As much as Americans want to shut these people down they can’t. Members of this church do not use any physical violence, they hurt with words and that’s all. 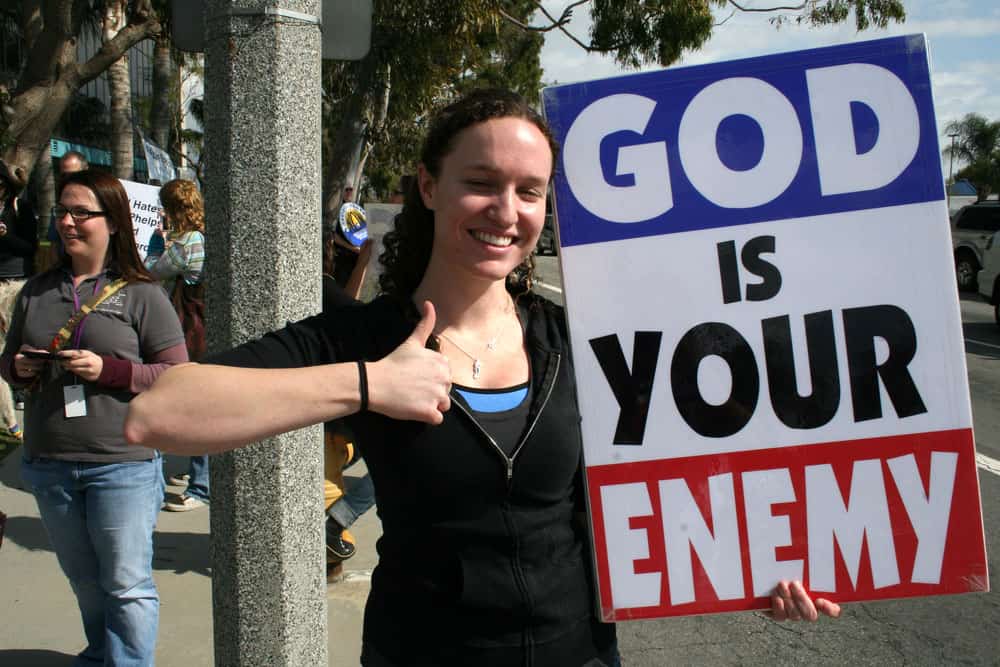 However, America would not be the same if there was no freedom of speech. That’s why the police can’t stop these guys from picketing. They can say whatever they want without any consequences.

12. The Pastor’s Star Child Goes on the Tyra Show

The Westboro Church needs as many lawyers as possible to defend their picketing. Most lawyers do not want to help out a group of people who hurt so many, that’s why members of the church become lawyers themselves. Fred Phelp’s had 13 children. Shirley is the star child out of all her siblings. 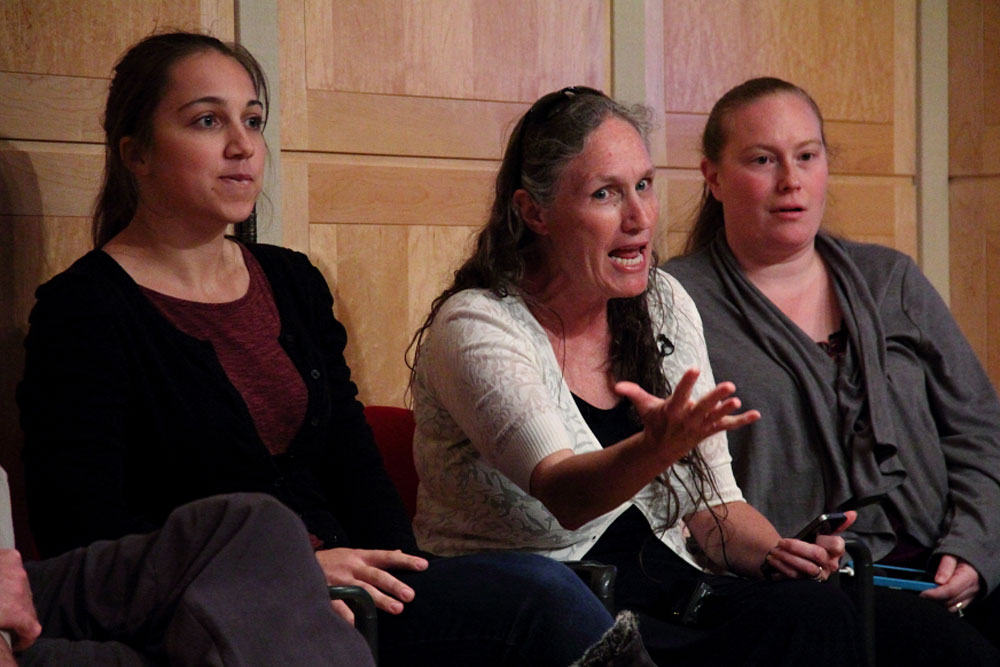 She’s as fantastic a lawyer as she is scary picketer. Shirley speaks on multiple TV shows including the Tyra show. She justifies her Church’s mission, no matter how offensive.

Shirley Phelps has 11 children, but she only speaks to seven of them. Four of her children left the Church for obvious reasons. They realized how their church was only hurting others as opposed to helping them. Two of her daughters were as devoted as Shirley. 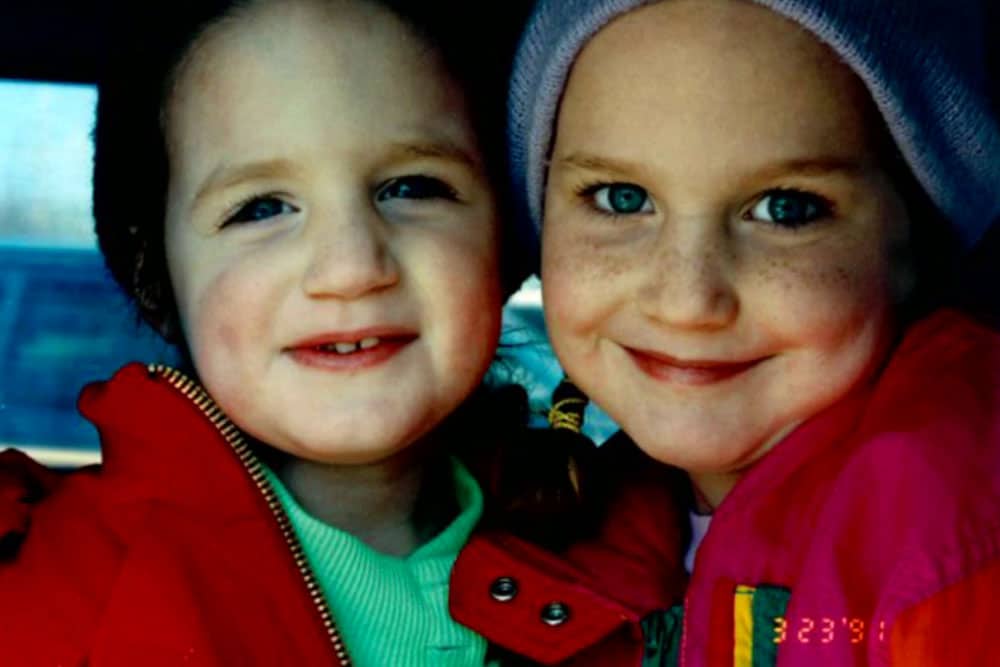 They made television appearances and picketed as much as they could. However, they decided to leave the church which meant leaving their brothers sisters and parents behind. Those who leave are excommunicated.

14. From Westboro Pickets to Fitness Modeling

Lauren Drain grew up in the Westboro Church. Hare was everything she knew. When she realized that her upbringing was hate-filled she decided to leave. She hasn’t seen or spoken to her family since she left. 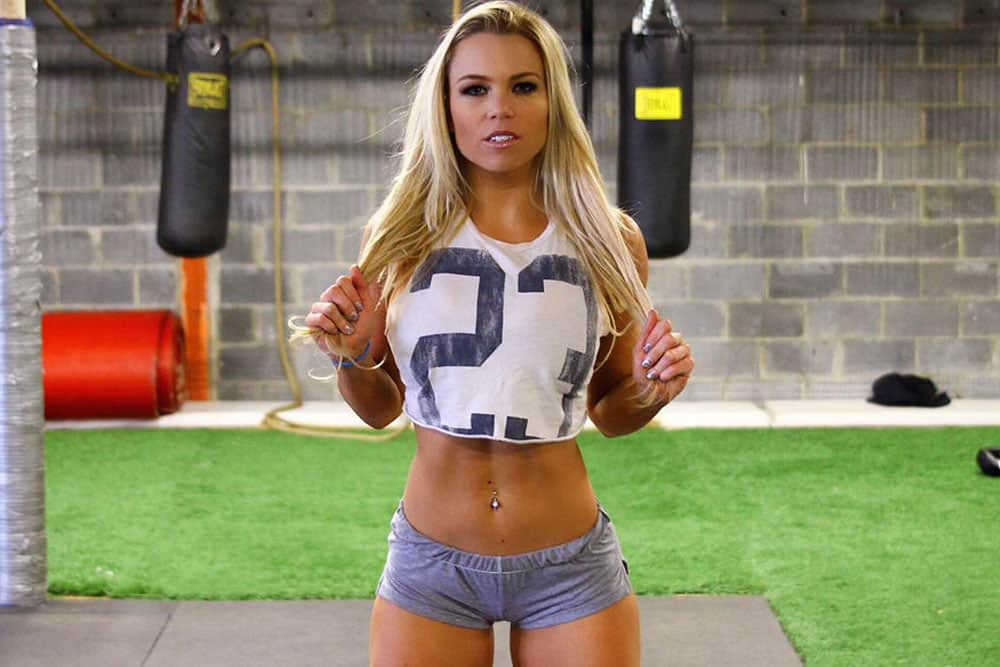 Lauren went on to be a cardiac nurse as well as a fitness model. In interviews, she says she misses and still loves her family.  She hopes one day they’ll realize what she did.

Lawyers try hard to find a way to shut down the Westboro Church’s hateful protests. After the supreme court ruled that the Westboro pickets are protected by freedom of speech, people tried to accuse the group of committing hate crimes. 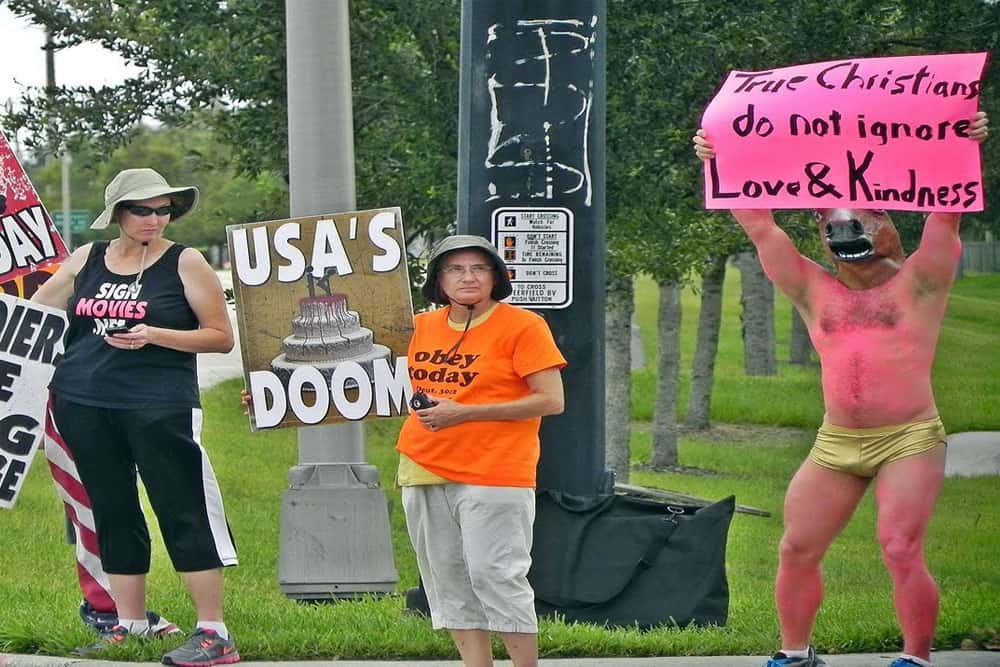 Westboro Attorneys argue that their protests it does not hate speech because they do not claim to hate soldiers and homosexuals. They claim that G-d hates them. This loophole protects them from getting shut down.

Before the leader of Westboro Baptist Church was disbarred for getting aggressive with witnesses in court, he devoted a lot of time an energy trying to abolish Jim Crow laws when America was still segregated. Many wonder how Fred was so kind in some ways yet so evil in others. 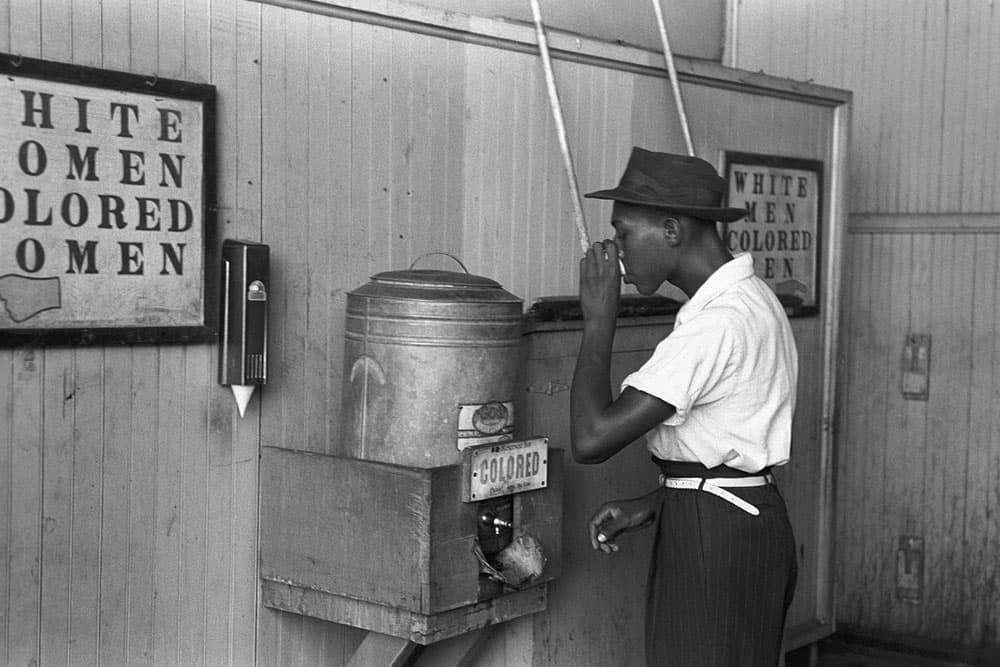 In an interview with Tyra Banks, Shirley Phelps explained that the Westboro Church is not racist. They are anti-gay because according to their interpretation of what they call”the scriptures,” homosexuality is forbidden. However, these scriptures say nothing about hating people because of their race.

17. Even the KKK Can’t Stand the Westboro Baptist Church

The KKK is one of the most ruthless, despicable, hate groups in the world. They share the same views as the Westboro Church in regards to homosexuality but they differ when it comes to the U.S Army. The KKK gives the army 100% support. 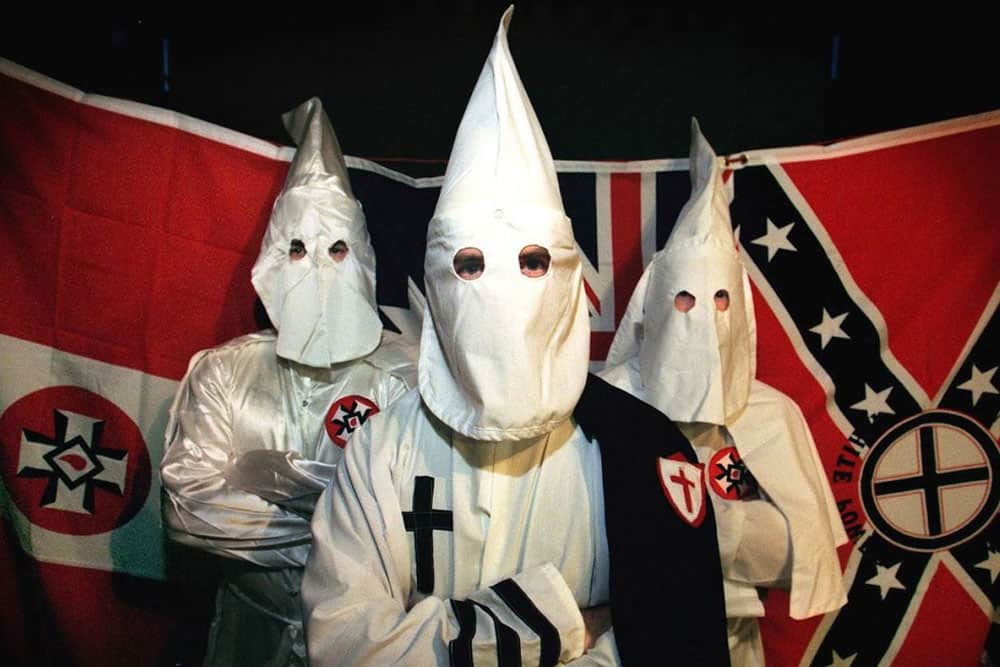 But the Westboro Church has hurt so many families of fallen soldiers to a point that the KKK refuses to align with the members.

18. Who Makes Their Hurtful Signs

The Church has a room where all their picketing sings are stored. A team of members volunteers spend their time brainstorming new ideas for their picket signs. 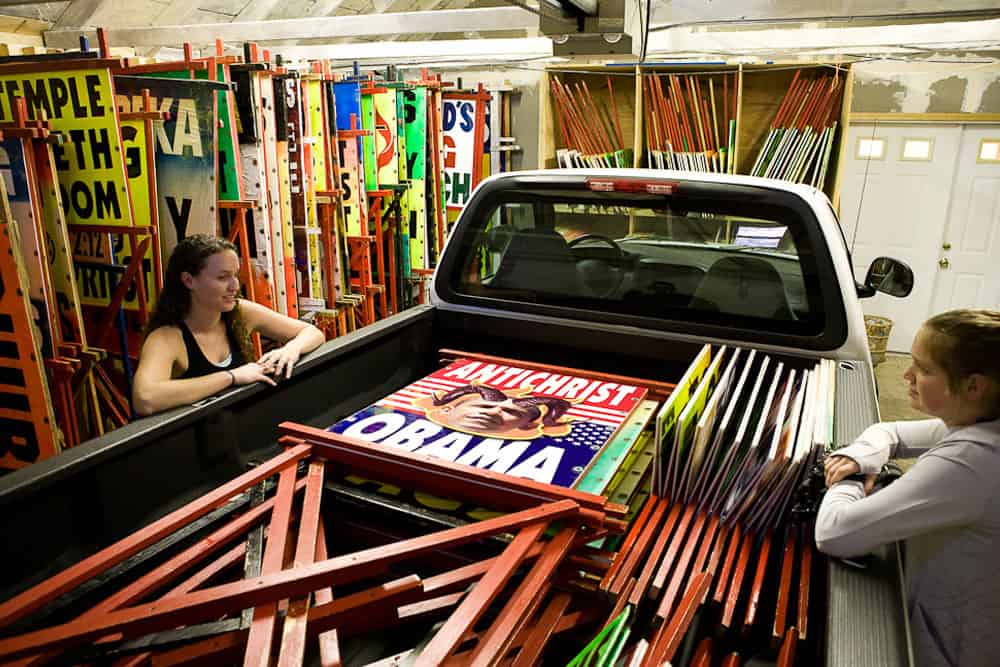 Every time there is a picket scheduled, the church sifts through their storage and searches for a sign that’s relevant to their picketing. It’s amazing just how many they have.

19.  Ex-Church Member Apologized to a Mother of a Fallen Soldier

On the lest is an ex-member of the Westboro Baptist Church. She realized how badly she hurt others around her by participating in her church’s activities. She was invited on a talk show to describe her experiences. In the crowd sat a mother of a fallen soldier. The Church had picketed her sons funeral and it was a horrible memory she will never forget. 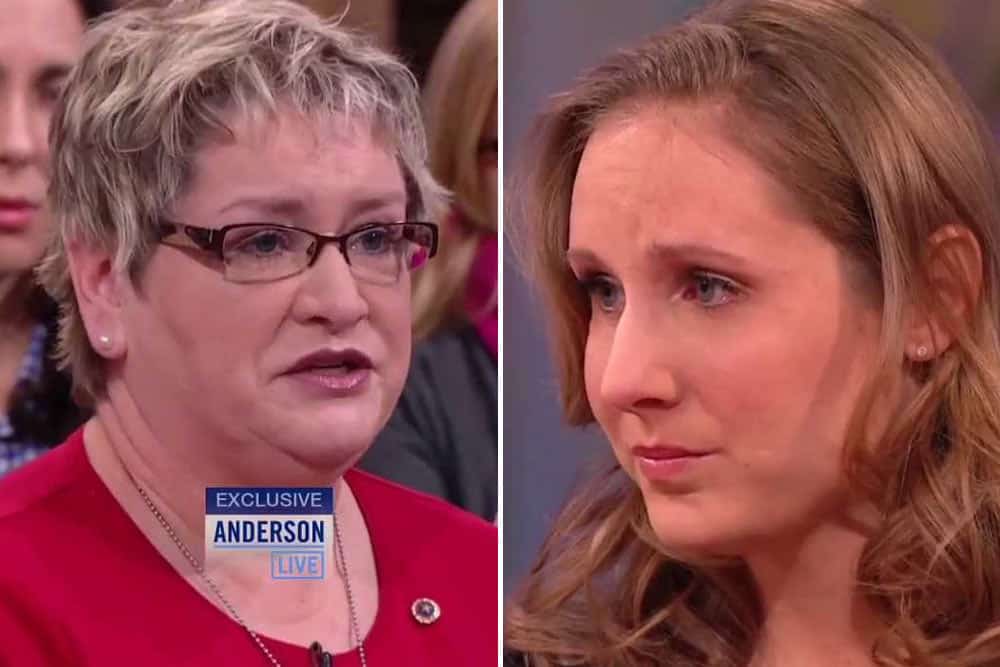 This ex-member apologized and said she was so sorry. She was told she was doing this to help other people avoid going to hell, but then realized she was only causing harm to others.

20. An Equality House Was Built Right Outside The Church

Since most normal people would not want to live outside of this Church full of hate, no one bought the lot in front of it. 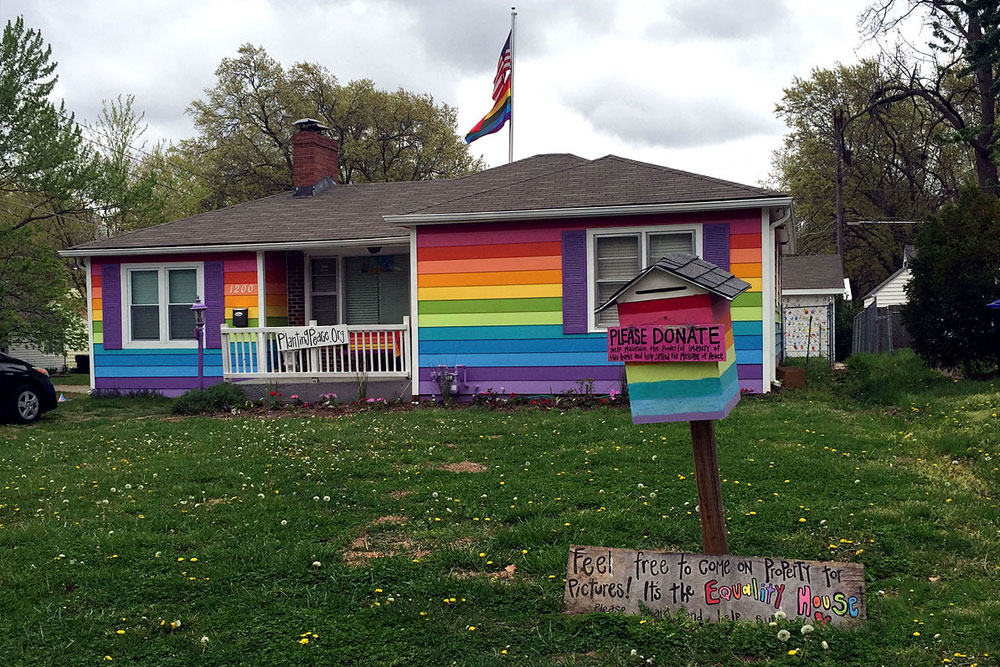 Finally, an LGBT group decided to buy the land and build what they called the “equality house” that preached the exact opposite of what the Westboro Church preached.

Right before his death, Pastor Fred Phelps was excommunicated from Westboro Baptist Church. It’s said he had a change of heart about his religious beliefs and acknowledged the “Equality House,” a local LGBT support organization, as “good people.” 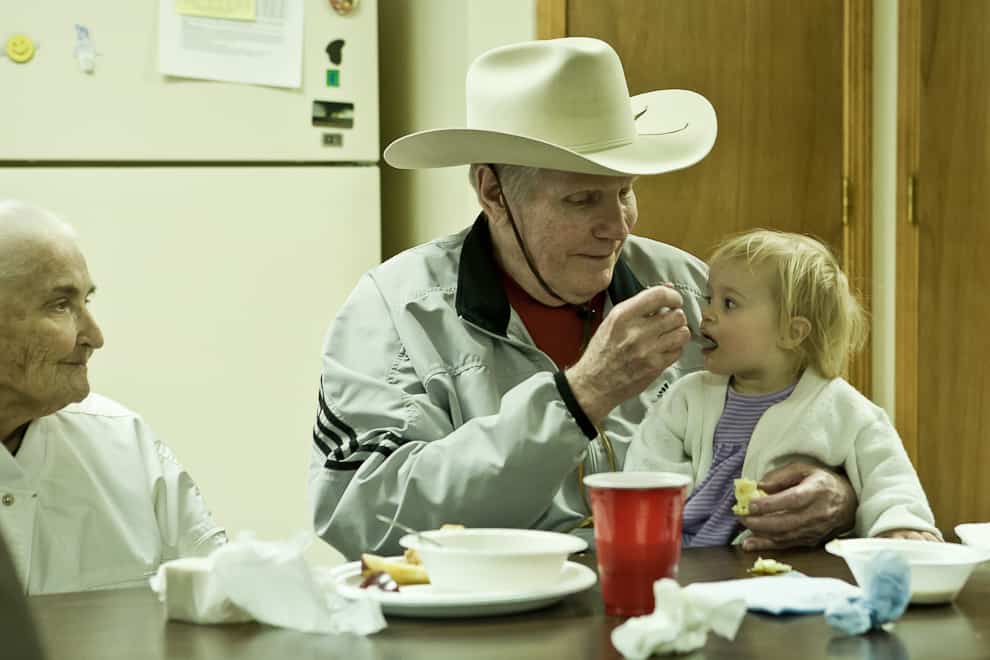